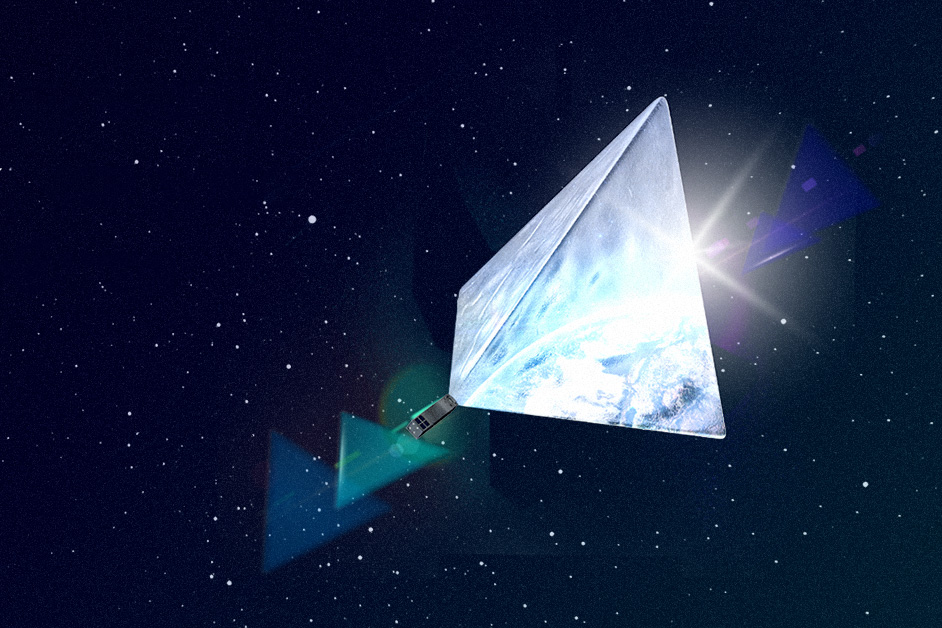 There’s a saying among Russian advertisers: “the best idea is to rent the Moon.” Fortunately, the Moon isn’t for sale, but space itself is up for grabs, so companies and amateurs are now launching dozens of small satellites (smallsats) into orbit at a time.

You can’t see most of these satellites from Earth, but for the next month, a smallsat developed by students at the Moscow Polytechnic University may be visible to the naked eye. In fact, if all goes well for the team behind the project, it will be the second brightest object in the night sky, second only to the Moon.

It’s an ambitious, largely crowdfunded endeavor led by a Russian advertising agency 12.digital that says its goals are to inspire interest in space, test science instruments, and perform a bit of advertising for its biggest investor.

Рабочее положение by CosmoMayak on Sketchfab

“The pyramid is like a parachute for satellites,” Panov said. “It’s a small system and if a satellite finishes working, you can press the button on Earth and the parachute will open and cause the satellite to go down to the atmosphere much faster.”

Mayak received a free ride aboard the Soyuz rocket, thanks to support from Russia’s Roscosmos space program. Roughly 60 percent of the project was supported through crowdfunding, with the rest coming from a sponsorship with a banking startup appropriately named RocketBank. For its sponsorship, RocketBank will brand Mayak as the “Cash Back Star” for its 200,000 users. However, 12.digital insists it’s not just about the advertising.

“We’re an ad agency but we realized we’re interested in some technologies and we met some young engineers and decided to work on this project together,” says 12.digital partner, Nik Ershov.

“We don’t want to move advertisement to space,” he added. “We understand that in the future some companies will use space as an area that people can’t avoid. But we’re scared about that. We don’t want to think in that context.”

Nonetheless, it’s tough to deny the potential for space advertising and the Mayak stands as an example of how companies may capitalize on the open space above us.

The satellite will orbit Earth about sixteen times every day, Ershov estimated, and should be visible from regions around the globe. The team has also released an app to help users track the Mayak in real time.

The best online JS tools can be found at HTML-CSS-JS.com: script beautifier, compressor, cheat sheet or just read the blog.

Advertising | Space
← ATARI’S LATEST RELEASE IS A BLUETOOTH BASEBALL HAT IT as a Service (ITaaS) - Whatever happened to just service? →
Share This